As an architect exploring the meaning and design of fluid spaces, I have been curious about the potential of VR for representing and creating ambiances—not only visualizing but also feeling and testing spatial variations/spaces of affect. In 2017 and 2018 at l’Ecole des Ponts ParisTech, I have supervised the VR-related work of two wonderful students enrolled in the Advanced Master in Design by Data:  Keerthana Govindarazan (2016-17) and Bonny Nichol (2017-18). Both have been investigating how VR can be used as a design tool.

On one hand, Govindarazan developed a “rudimentary web VR system” to “user-test architectural design for behavioral patterns”. To conduct her experiment and test if behavior in VR environments were similar to expected behaviors in real life, she started by modeling a space based on an architectural principle devised by design theorist and practitioner Christopher Alexander (author of A Pattern Language, 1977):

Figure above: The time spent by the same user in each clicked location is visualized in this image for scene 1. The more time spent, the bigger the radius of the circle and the warmer the color. [Keerthana’s edited caption]

On the other hand, Nichol focuses on the concept of “attention”. She is aims at translating eye-tracking and EEG inputs captured during VR spatial experience as design data. 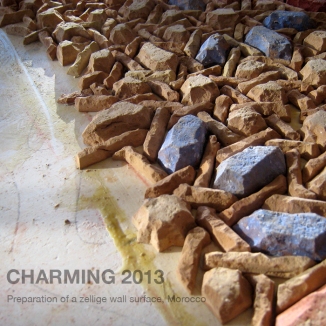