The first time I went to the retrospective exhibition of the work of French artist Pierre Huyghe at the Pompidou Center, a doorkeeper/butler asked for my name. Too surprised to decide if I should or not answer, I gave in… to then hear him announce “Yasmine” in a very loud voice. Nearby visitors looked at me smiling. I thought that the next time I’d go, I’ll say: “nobody” – the next time around though, the persona had disappeared.

Announced like a courtesan entering Versailles’ Hall of Mirror, I got identified in the social theater orchestrated by an invisible puppeteer. I became Jane in a media forest (1) where everything, work of art, props or people, actants and hypertexts, created a space as fluid as water in a fishtank. From a particular angle, for a suspended moment, I saw the mirrored image of the muse of Brancusi’s double, home to a hermit crab, who seemed to be gazing out, reflecting on her fate (See picture above). The curious hybrid shifted slowly, so I went, guided by a change in temperature. The meteorological architecture of the exhibit enables what architect Philippe Rahm calls a “geographical détournement” (Rahm, 2001). Transported elsewhere, beyond the surface of the ice-skating rink where a female dancer was shuffling the air, an electronic sound echoed that of cash registers. It must have been the ice-cold air temperature, with the entertaining tile-matching neon lights fixed to the ceiling, and kids interacting with the connected gaming device. I felt I had moved from Versailles to a supermarket.

Invited in Pierre Huyghe’s magical milieu (von Uexküll, 1934/new edition 2010) I experienced contemporary space which is, as described in Ito’s seminal essay (Ito, 2011), comparable to a media suit, fluid as water (when at room temperature) and connecting. 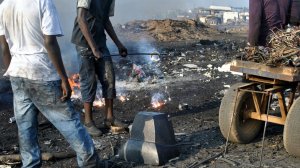 Dk Osseo-Asare, Principal at LOW Design Office, and myself are launching the pilot project of the Agbogbloshie Makerspace Platform (AMP), thanks to Rockefeller Centennial Innovation Challenge Award funding. We are now looking for talented designers with experience in architecture, electronics and environmental systems. Find more about the project on QAMP, the blog associated to the endeavor. In support of the initiative and to open opportunities to students to get involved and learn more about the informal sector, e-waste, the maker movement and development, I am also conducting a semester-long seminar/workshop at l’Ecole Spéciale d’Architecture this Fall.

Teaching again the MAP seminar at l’ESA this semester. Last year the students did a great job of exploring the five senses. Following a discussion with Dk Osseo-Asare from Low Design Office this summer, I am rethinking the acronym, changing it to Motorizing Architecture Processes instead of Motorizing Architecture Paradigms. The “wordsmithing” is necessary as I decided to focus on mapping the invisible, exploring the agency of maps and the parallel between the processes of mapping and designing.

While projection systems and technologies ­have increased their accuracy (we think of today’s Geographic Information Systems (GIS), open digital mapping platforms such as “open street map”, and locative media), maps have gained agencies, which challenged their “veracity”. Maps, like the census and the museum, can enable the construction of national identity (O’Gorman Anderson, 1991). Maps include and exclude, prompting author Philippe Vasset to explore the unrepresented spaces of maps, these left blank (Vasset, 2007). (Dis)information visualization, which is what maps essentially do, is about editing information (collecting and choosing), organizing (in a collection) and coding it. Now, maps are also dynamic, “perpetually updated objects” to the point that we “inhabit both the city and its representation” (Desbois, 2011). Maps thus precede territories (Baudrillard, 1983); they exist before that territories materialize. The codes embedded within become the parameters of an imagined or could be space.

What is social architecture? Cesar Harada, inventor, entrepreneur and environmentalist came organize a workshop to think through what is social architecture. This event organized for the seminar MAKE led by Marie Aquilino – event to which I collaborated – happened at l’Ecole Spéciale d’Architecture. Students of the MAP seminar participated to the event. Here below is an embedded time-lapse video of the event edited by Cesar. Thank you for the wonderful time and for making us think about decision making, tasks, roles, steps, iterative design, linear/branched/complex networks, voronois, etc. all this though MAKING – in 3h – a structure out of flexible plastic tubes and paper, string, electrician tape and wallpaper paste :-) Find also the Social Architecture Flickr set.

En Vie / Alive: a free exhibit not to be missed in Paris at the Espace Electra of the EDF Foundation. Above left: The mycotecture [2012] of Philip Ross or how to manufacture pieces of furniture and bricks with mushrooms.
Above right: Tomáš Libertiny, Vessel #1, 2011 – 60000 bees contributed to design this vase. It took two months to shape.

Yesterday I have invited Anne Chaise to present her work on Technologies And The Future As Represented By The Feminine Press From 1945 to 1968 during the Technologies, Architecture, urbanism course that I teach at l’ESA. Not only Anne is a pearl, but she is also a mine of information and the awesome librarian in chief at school.

Anne had gone through 1200 ELLE and 196 Marie-Claire back issues to find out that in these times, the magazine, which was already a strong medium of advertizing, had the goal of transforming the mentalities, to reconcile people with progress and science (invented/used during war time), eyes focused on the USA where technologies of the temporary, prefabrication, and standardization was being developed. I spoke already about how Buckminster Fuller envisaged post-war housing, free from infrastructure so people could pack and leave easily in case of war. That was the mindset.

ELLE and Marie-Claire had for mission to educate the good “manager” of the house (the word share the same root with the word “ménagère” in french) – the woman who had to be “clean, economical, efficient, ingenious, managing her own budget,” etc. Anne found that 31% of the magazine related to home improvement, the Salon Des Arts Ménagers, individual housing, préfabrication, mobility and flexibility (even featuring the work of Buckminster Fuller!). ELLE was participating (they had a stand) to the Salon Des Arts Ménagers as the magazine was at that time selling prefabricated houses designed by then young (and promising) architects such as Ionel Schein and Claude Parent. ELLE was also touring France with a mobile home to sell this new way of living.

In the ELLE issue 435 of 1954, the magazine shows a table summarizing how “authors of science-fiction, philosophers, scientists, visionaries or even imaginative individuals announce with a charming precision” the “everyday life of tomorrow’s man”. What was thought to arrive in 2500 has almost all already happened:

Here below are a couple of picture of Anne Chaise showing her preparation work with the time line in relation to the articles of interest she found: 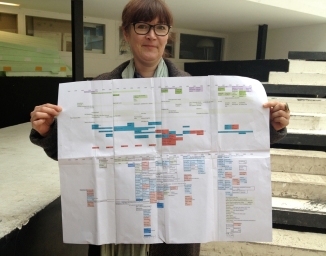 Introduction to Stellate Innovation. Started in 2012 by Dk Osseo-Asare and I.

You’ll be hearing about DANT! Giving a talk on March 19.